Renzu - Across the Threshold [foot096] 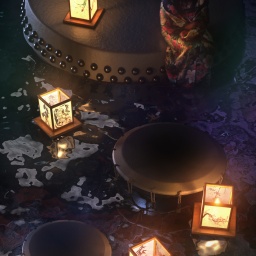 Renzu - Across the Threshold [foot096]

Some of netlabel freaks know Renzu, who released Reiha EP from Monotonik. When I received his works, I was waiting for the time of this release. And now I'm delighted it has come finally!

Here comes my review, one by one :

Inn - You can hear a female say "koko wa doko deshouka?" ("where do you think this place is?) Where does she take us? Where is here?

Pictures of the Floating World - This could be the answer to the previous question. Ethnic and oriental, like Japanese, but it would be other than Japan.

Omamori (御守り : amulet) - A mixture with Japanese sounds and rhythmic sequences. As we move towards the end, our minds get uplifted, higher and higher...

Amasawa - The title refers 天沢勇子 (Amasawa Yūko) from TV series, 電脳コイル (Dennō Coil). "The idea to use an arpeggiated glockenspiel in the song was inspired by series' music", Renzu said.

Zashiki-warashi (座敷童子) - It is a spiritual being, a kind of Yōkai, too. With this flowing 4-beats tune, it makes me feel like they are playing a trick.

Daifuku (大福) - We met unexpectedly. It was white, it was sweet. The wonderful time we spent together, but it didn't last so long. I can't forget you. I miss you. I want to see you again. My dear Daifuku... Joke.

Nakoruru (ナコルル) - You know her, if you are familiar with サムライスピリッツ (Samurai Spirits / Samurai Shodown). Slower, chilling and relaxing tune, with Japanese traditional elements.

Miku Acid - Well-processed tracks feature girlish vocal. This is especially for Japanese listeners. Who is Miku? Come on, you know it? Yes, she is, the one and only, 初音ミク (Hatsune Miku).

Stage - It may be night, but it changes suddenly. It takes us to somewhere another.

Across the Threshold - Here is the title track, purely electronic. Now we are far away from "the Floating World".

Memories of Earth - We are leaving from, or going back to where we live? I can't figure it out. All fades away...